Refilmery Series takes you behind the scenes to discover the process and strategies that filmmakers and creative people employ in their work.

Welcome to Refilmery! We are a film and photography production company in New York and each week we turn the mic on our fellow creatives and the brand leaders we produce films for, to find out why they make their films, and how they use storytelling to reach their audiences.

Does starting a craft early in your childhood make you a better creative later on in life? 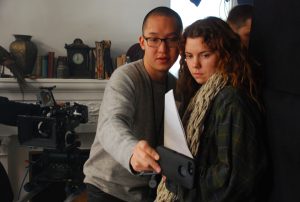 In today’s episode, we learn about the career path of Lauren Brady, the producer of films like Jane Wants A Boyfriend, Live Cargo, and Women Who Kill.

She has a range of filmmaking experience, from short and feature films, to commercials, documentary, and Reality TV. She’s currently a producer at VOX Creative.

We discuss her pathway from directing at film school, producing branded content, putting the perfect team together, and the process of writing.

The Refilmery Series takes you behind the scenes to discover the process and strategies that filmmakers and creative people employ in their work.

The show is recorded at our live event in New York at WeWork SoHo West – the perfect venue to meet fellow creatives and movie buffs. The intimate venue means you’ll actually get to meet the filmmaker.

Join us in person and you’ll receive complimentary beer and popcorn and get to see the film on the big screen. Visit http://Refilmery.com/Series for upcoming events.

Lauren Brady is a freelance Producer and Director living in Brooklyn, NY. Her producing experiences range from Features and Shorts to Commercial, Corporate and Branded Content to Music Videos, Documentaries and Reality TV. Her directing work has screened at over a dozen festivals, and has been featured in The New York Times.

Prior to working as a freelancer Lauren established and served as Head of Production for the New York office of Lonelyleap, a documentary commercial production company.

She is a graduate of NYU’s Tisch School of the Arts, and is allergic to peanuts.

View her work at laurenbrady.com